How Long Does a Tesla Battery Last Before Replacement? 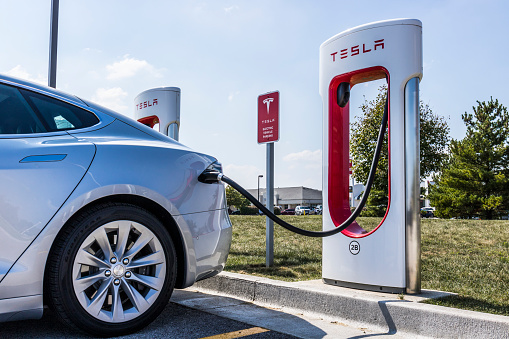 While electric vehicles have been around for quite some time, Tesla has become quite popular over the past few years. It is one of the best electric cars boasting plenty of battery technology and class-leading ranges. However, they are not immune to a common issue with most battery-powered models- the battery's life. So, how long does a Tesla battery last?

Like any electric car, there are a number of factors that affect the life of the battery, for example, the usage and charging routine. Keep reading to find out how long a Tesla battery lasts as well as some important tips for care and maintenance of the battery to ensure you get the most out of it.

Table of Contents
What Kind of Battery Is Found In a Tesla?
Tesla Battery History
How Long Does a Tesla Battery Last?
Tesla's Battery Warranty
Why is the Range Different for Every Tesla model?
1. Size of the Battery
2. Model of the Car
3. Driving Method and Conditions
How Do I Tell My Tesla Has Run Out Of Charge?
What Causes Tesla Batteries Lose Capacity?
1. Cyclical Aging
2. Calendar Aging
Factors That Reduce The Effectiveness of Tesla Batteries
1. Temperature
2. Charging habits
Top Tips to Maximize Your Tesla's Battery Life
1. Stick to a Regular Charging Routine
2. Drive Smoothly
3. Don't Supercharge, Unless It's Necessary
4. Avoid Charging The Batteries to Over 80%, Unless it is Necessary
Frequently Asked Questions (FAQs) on Tesla Batteries
1. How often do Tesla batteries need to be replaced?
2. How much does a Tesla battery replacement cost?
3. How Will I Know When My Tesla Is Done Charging?
4. How does a fully charged Tesla compare to gas-powered cars?

What Kind of Battery Is Found In a Tesla?

Using Cobalt at its core, Tesla batteries are quite similar to the one on any electric vehicle. However, due to the use of Cobalt, unlike other established car manufacturers, batteries tend to be more expensive. However, Tesla is slowly moving away from using Cobalt to a unit that has third manganese and two-thirds nickel. This new design will make the batteries cheaper to produce and also improve the range.

Over the years, the Tesla battery has evolved, with different batteries being used for different Tesla models.

How Long Does a Tesla Battery Last?

There is no easy answer as to how long a Tesla battery lasts. Generally, if you use a smart and effective method, then the battery can last you for a lifetime. With an estimate of 200,000 miles on most cars, Tesla claims that the battery pack can outdo the car itself.

Here is a breakdown of Tesla's battery capacity retention takes on different models.

Of course, the battery's lifespan or battery capacity retention of your brand new Tesla will be affected by many other factors, just like other electric cars with an electric motor. These factors include the charging frequency, temperatures, the owners driving habits, etc.

Fortunately, Tesla batteries come with a warranty, which means if they break down or stop performing for some reason, within the period, you will be covered. However, Tesla's battery warranty varies depending on your car. Here is a breakdown of the battery warranty based on your car model;

All Tesla car model batteries have a battery warranty of at least eight years when you have not hit the miles mark. Ideally, your car battery should last for over eight years, but if anything happens within the first eight years, Tesla got you covered.

Why is the Range Different for Every Tesla model?

1. Size of the Battery

The battery size of a car model will affect the battery capacity and mileage of the car. It also determines the car's cost. For example, Model 3 Standard Range, which has the smallest battery, can drive up to 250 miles on a full charge and is cheaper than Model S Long Range, which comes with a bigger battery, that can go up to 402 miles with a full charge.

The car model will affect how long the EV batteries will last. For an affordable option like Tesla Model 3, the battery is small, which is great for running errands or your daily commutes. The Long-range models have bigger batteries and are a great option if you're looking for an electric car that performs better than gas-powered vehicles.

The Performance models are quite similar to Long Range models, but they include additional features like a carbon fiber spoiler, a better traction control, and improved interior styling. This performance model accelerates even faster, but it's not your typical commuting car. However, if you're interested in style and performance, then this would be a great choice.

Just like the traditional internal combustion engines, your car's battery will be affected by how you drive. Generally, you might not make it to full range if you drive fast, and the battery will be depleted faster. Furthermore, the battery tends to use more power when driving in tough conditions like rainy or snowy weather.

To maximize the battery, ensure you're driving at a safe speed, brake slowly, reduce the excess weight that is inside your car, and keep the tires fully inflated. Like any car, the way to take care of and maintain your Tesla, the longer the battery will last. However, no matter how well you take care of your car, there is a point where battery replacement will be needed.

How Do I Tell My Tesla Has Run Out Of Charge?

There are several ways that you can use to determine if your Tesla is running out of charge. They include;

A Tesla battery pack has over 8200 cells to optimize the range of the car. However, despite the quality design and high standard manufacturing, some battery cells will lose capacity. There are two mechanisms that come with battery aging including;

Cyclical aging is where you constantly charge your batteries and repeating the cycle, which causes them to degrade over time. With each cycle, there is a specific amount of degradation. Modern lithium-ion batteries can withstand three hundred to several thousand cycles before they begin to develop signs of battery degradation.

Calendar aging is the battery degradation that happens regardless of the mileage that you go with your electric car. It can occur when the battery hasn't gotten enough charge cycles, and you haven't driven the car as much. It is a result of consistent mechanical stress produced by the lithium ions, which leads to cracking inside. This cracking causes some parts or the entire battery pack to have an uneven flow of electrons.

Factors That Reduce The Effectiveness of Tesla Batteries

There are two major factors that are known to worsen the battery capacity of a Tesla model. They include;

High or low temperatures are a huge factor when it comes to your Tesla battery health. Ideally, the environmental temperature can determine how many miles a Tesla can go for when it's fully charged. Tesla owners who will leave their vehicles parked under a lot of heat from the sun tend to have plenty of issues.

Additionally, cold weather will also impact how long Tesla batteries last, but their impact is temporary and will only happen when it comes to charging. A lithium-ion battery is not able to perform well under severe conditions. Therefore, it is vital to utilize the preconditioning feature, which allows your battery to cool down or heat up depending on the temperature.

Battery degradation has a direct link with the charge cycles that a Tesla can take. There are two main types of cycles a partial cycle and a full cycle. For example, charging the battery up to 100 percent then leaving it to discharge to 0 is more damaging than charging it to 80% after it has discharged to about 20%. In fact, Tesla recommends keeping the charge between 80 to 90% and ensuring it doesn't fall below 10%.

1. Stick to a Regular Charging Routine

It is crucial to stick to a regular charging routine to ensure your car gets a proper charge instead of plugging it in for short times at random intervals. Note that every charge cycle will take a small amount out of the battery life. This means that longer and less frequent charges will provide less of a hit to the battery cell rather than shorter and more frequent ones.

As mentioned earlier, the driving speed and condition may affect the battery life. As a result, if you drive smoothly and at a standard speed, you will be able to maximize the Tesla's range and have to charge it less often. On the other hand, slamming your brakes every now and then and staying above your speed limit won't do your car any good.

3. Don't Supercharge, Unless It's Necessary

While Tesla's supercharger network is an impressive feature that allows you to take your battery charge from 10% to 80% in approximately 35 minutes, using it very often may have a negative effect on your battery. Fast charging rates lead to faster wear of batteries, but that's not to mean you should avoid the feature entirely because it is super useful.

4. Avoid Charging The Batteries to Over 80%, Unless it is Necessary

In most cases, when the battery is charged over 80% of its total capacity, it experiences more stress when being charged, which in turn negatively affects the lifespan of the battery. If you don't necessarily need the full range battery charge, having it below 80% will help improve the new battery life.

1. How often do Tesla batteries need to be replaced?

Unlike other electric cars, Tesla batteries are designed to last for about 300,000 and 500,000 miles, and this is when Tesla owners will be required to do a replacement.

2. How much does a Tesla battery replacement cost?

3. How Will I Know When My Tesla Is Done Charging?

Your Tesla model will indicate your battery charge. It is equipped with a diagnostic system that shows charge information. As a result, you will be able to see how much charge or battery life you have or how much you need.

4. How does a fully charged Tesla compare to gas-powered cars?

When it comes to the durability of the batteries and the mileage range, Tesla cars have become a more reliable option. A tesla's upfront costs range from $37,000 to $125,000 depending on the model, which is much more expensive than most gas-powered cars. However, it is more expensive to pay for gas than it is to charge your Tesla. So, in the long run, you will save money.

Best LED Shop Lights for a Garage and Workstation